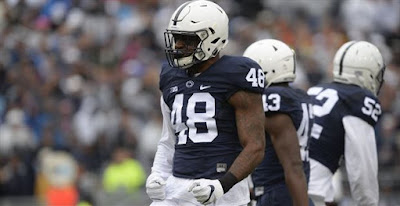 Shareef Miller was a 3-star defensive end coming out of George Washington high school in Philadelphia, Pennsylvania. At 6-5 259 his power and speed made him one of the menacing defensive prospects in college football. This past season was his best; Miller had 41 tackles, 15 tackles for a loss and 7.5 sacks for the Nittany Lions. The Philly native recently declared for the NFL draft after his junior campaign. He had a talk with NFL draft room about what he brings to an NFL team and what he had to overcome coming up.

LJ: What made you feel like this was the year for you to declare for the NFL draft?

Shareef: I feel my time here my production increased every year and I just think coming back to PSU wouldn;t have helped me any better. I would’ve been the same player my senior year.

LJ: I feel you are a 4th round prospect with the potential to reach the 3rd round what have scouts told you?

Shareef: At the end of the day I can control where I get drafted. Scouts have told me rounds 2 through 4 but again that doesn’t matter unless you put the work in. For me I like that I don’t have the hype its cool I will just work.

LJ: I feel you can be an NFL starter. What about your play makes you an impact player?

Shareef: I can pass rush, I can play in space, I’m an effort player. It’s very few DEs than can chase WR and RBs 40 yards down the field. I’m athletic and raw once I get the right coach that teaches the fundamentals I will be the best. I will also run a fast 40 at the combine as a DE.

LJ: How has playing at PSU made you a better player?

Shareef: It made me a good college player. My defensive line coach Sean Spencer taught me a lot and I also learned a lot from older guys from the past.

LJ: What about your character will NFL teams like?

Shareef: They will like that I am a hard worker a guy that is going to compete and give his all. A guy that loves to win and coming from where I’m coming from and overcoming things I did to get to this point. I really think I will win a lot of teams over at the end of the day I need one team to fall in love with me.

LJ: With me being born in Philadelphia I know the toughness you must have in you. What part of Philly are you from? What has it been like growing up in Philly?

Shareef: I’m from Frankford. It was rough and tough and I live in a single parent home. It was a lot of negativity and violence a lot of my friends got killed. I just had to stay to myself and make it out with football. A lot of people wouldn’t make it from the inner city because it was a slim chance you would make it out because the wrong decision could change your life seriously. I had to survive those streets ain't no love out there where I’m from.