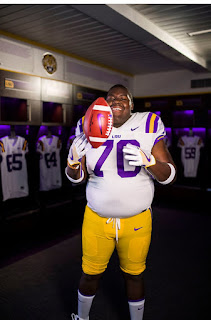 Kardell Thomas has rare athleticism at 6’4 328. He is a 5-star offensive guard who is the 25th prospect by Rivals, 32nd prospect by 247 sports and 86th prospect by ESPN for the 2019 class. He committed to LSU after efforts by major programs such as Penn state, Florida State, and Alabama. He went to Southern University Lab high school in Baton Rouge, Louisiana. We talked about what he would bring to a team and why he committed to LSU.

LJ: You are elite as a run blocker and pass blocker. What makes you such an impact linemen?
Kardell: What makes me an impact lineman is my athleticism at 340, the way I can move in situations and react on the fly most lineman can’t do that at 290 or lower and don’t have everything to make key blocks, they have to get it. I can do everything I just have to work hard and make it perfect because I can get the job done but it can be perfect with me perfecting techniques, God has blessed me.

LJ: Why did you choose not only to commit to LSU but stay at LSU? So many teams were after you to de-commit.
Kardell: Being home and being close to my family who have sacrificed so much to see me become what I’m, it’s only right they be able to make every game and also It’s these people in Louisiana who have put me on a high horse and expect a lot from me, I love this city this state and can never turn my back on them, everywhere I go the people of this great state salute me and you see the hope in their eyes of me becoming what they perceive me as which is a legend in the making that will work hard with my brothers to bring a national championship to this state.

LJ: What team was second to LSU?
Kardell: Florida when they had Brad Davis as their O-line coach, he was a friend of the family and with me knowing him I was comfortable, so it wasn’t so much as Florida the school itself it was Coach Davis.

LJ: How was it growing up in Baton Rouge? What struggles did you have to overcome that people don’t know about?

Kardell: It wasn’t really that hard my parents kept me from seeing struggles. And I feel that made me who i am today I had a childhood that was good. My parents sacrificed their last to get me to camps and that made me appreciate them more than ever.

LJ: What has LSU told you about your future with the program?

Kardell: LSU has put my future in perspective for me; it’s going to be up to me to meet my destiny there. I have a great chance to go in and start.

LJ: What type of impact would you bring to an NFL team?
Kardell: Honestly a guaranteed weapon who can open holes when it’s crunch time and also get up to the second level to clear it for the running back. And also they can use me to catch passes fluently to score.

LJ: What type of character do you bring to an NFL team?
Kardell: A leader of men, a guy who everybody wants to be around, and a guy who teammates will put it all on the line for him knowing he will do the same in return, also a man of God.

LJ: What positive impact do you bring to an NFL team in the locker room?
Kardell: A Positive impact that I bring is a funny attitude a guy who can make you laugh regardless.

LJ: It’s a lot of players who get in bad situations off the field. What about you tell teams you won’t be a problem off the field?
Kardell: My character when you look at me and talk to me it’s easy to tell I’m far from a trouble maker.

LJ: Do you feel like you can impact an NFL team from day 1?
Kardell: Yes Sir but I also know I have to grow too. I won’t be perfect but I won’t be a bust.

LJ: Do you feel you will make the starting lineup day 1 at LSU?
Kardell: I have to play my role and work for it that will come when it’s time.

LJ: What makes you such a special player?
Kardell: God I’m different in every aspect and it’s scary but understands that God blesses me with this talent.

LJ: What NFL player do you model your game after? Who do you feel is the best offensive linemen in the NFL?
Kardell: I look at Larry Allen these days linemen are getting called for being aggressive so I don’t model my game after them.

LJ: If you could pick an NFL team to play for who would it be?
Kardell: Carolina Panthers

LJ: What is any team getting with Kardell Thomas?
Kardell: A dog who isn’t afraid to bite. Or step up to a challenge.